This week’s Eagle Scout Spotlight is with the Golden Gate Area Council’s Camping Chair, Michael McDowell. Michael earned his Eagle in 1986 with Troop 93, Des Mones, IA of the Mid-Iowa Council. Studying at both Iowa State University and the University of California, Davis, Michael now finds himself living in Pleasant Hill with his wife. The former Scoutmaster of Troop 405, where his son attained the rank of Eagle Scout in 2016. Michael continues his service with the Golden Gate Area Council as a commissioner for the Briones District and on the council’s Camping, Communications, and STEM committees.

Where do you reside? I live in Pleasant Hill with my wife, Laura.  We have two adult children, one of whom is an Eagle Scout and just graduated from UCLA and the other attends college in Savannah, GA.

Do you have a job or career, if so, what do you do? I am an Adjunct Faculty member at Diablo Valley College where I teach General Chemistry.  I have worked in the Bioscience and Pharmaceutical Industries as a scientist and project manager.

Are you still active in Scouts? I am a former Scoutmaster for Troop 405 in Pleasant Hill.  When I stepped down from my role as Scoutmaster at the end of 2019, I became an Assistant District Commissioner/Unit Commissioner for the Briones District.  I still work with Life Scouts on their own Trail to Eagle.  I chaired the Golden Gate Area Council STEM Committee from 2016 (legacy MDSC) until the end of 2020 when I took on the role of Golden Gate Area Council Camping Chair.  I remain involved with the Council STEM Committee serving as a Nova Counselor and Supernova Mentor.  I also work on the Communications Committee helping with website content and maintenance.

Eagle Fact
To learn about the GGAC’s STEM opportunities, visit their website page at stem.ggacbsa.org.

Are other members of your family involved in scouting, are any of them Eagle Scouts? My son earned his Eagle in 2016 as a member of Troop 405. My brother is an Eagle Scout (Class of 1979).

How old were you? I completed the work on my Eagle Scout in 1986 about three (3) days before my 18th Birthday.

What unit, city, council did you earn your Eagle in? I earned my Eagle as a member of Troop 93 in Des Moines, IA (Mid-Iowa Council)

My project involved insulating the attic of the Pre-school of St. Andrew’s Episcopal Church (where I attended Pre-School). We also worked to weatherize the Pre-school building windows.

I don’t know if it was my favorite, but I still remember the first merit badge I earned, Fish & Wildlife Management, as it was something I was really interested in at the time, but once I got to college, I realized I liked biochemistry better.  The merit badge that has probably stuck with me the longest is one of my favorite ones to counsel, Environmental Science, as it connects much of the chemistry I know with ecology and the environment.

For me the Eagle Scout is about service.  I still remember the adults that were there to guide me along the Trail to Eagle, Kraig Snodgrass, my Scoutmaster, and Ken Stinson, my Eagle Mentor, so I continue to give back to the program because of their work with me.

Scouting was an important aspect in preparing for life after graduation from high school, and it was a factor in my receiving an academic full ride to Iowa State University for Biotechnology in Agriculture.

For Life Scouts looking for or wondering about an Eagle project, find something that you are passionate about and use that as a launching pad for your project.  It will provide you with a deep sense of satisfaction when you complete your project and help motivate you at points of low energy.

A Scout is Resilient.  Between my own son’s journey to Eagle, three States and four Units, and the struggles that the Scouts earning Eagle over the past 18 months have had to cope with, I feel being resilient to these challenges is a crucial part of life. 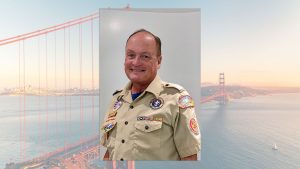 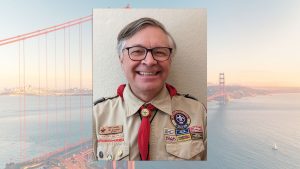