This week’s Eagle Scout Spotlight is on Josh Phillips. Josh is the current Eagle Scout Coordinator for the Golden Gate District, taking over for Outstanding Eagle Scout Larry Teschera. He earned his Eagle with Troop 159 of San Francisco from the legacy San Francisco Bay Area Council. As a scout, Josh spent eight summers working in the corral at Wente Scout Reservation. A former San Francisco police officer, he now volunteers as an Assistant Scoutmaster in his son’s troop, Troop 15.

I live in San Francisco with wife and two sons.  I am an Asst Scoutmaster with Troop 15 where my son is a Life scout.  I am the current Eagle Scout Coordinator for Golden Gate District.  My father was a Scout in San Francisco in the 1950’s.

I earned Eagle Scout with Troop 159 in San Francisco when I was 17 in the Legacy SFBAC Council.

Hap Velleno was my Scoutmaster.  Troop 159 sure is Fine!

I removed, cleaned, and painted over graffiti over a 3,000 square foot wall on the schoolyard of my school, St. Paul’s.  The schoolyard was open to the public on weekends.  Additionally, I cleared out a junk room for the school and renovated it into an art room, and cleared about 50 old desks from the school’s attic.

My favorite Merit Badge was Horsemanship.  I went on to work at the corral at Wente Scout Reservation for 8 summers working my way up from CIT to Corral director.  I am still a Horsemanship counselor.

Eagle Fact
Horsemanship Merit Badge is one of the original 57 merit badges introduced in 1911 and was initially known as the Horseman Merit Badge.

Jokingly, I say that being an Eagle Scout means that you are the one everybody else is going to ask to tie the knots when loading a truck, but in many ways, that is exactly what being an Eagle Scout means.  You must live to be the one people turn to when they need help, the one people trust to do things right, and the person to lift up others by showing them the way.

The skills and values I learned and reenforced through my journey to Eagle Scout literally shine through in every moment of my life.

I think becoming an Eagle Scout developed my desire to share knowledge.  It is very rewarding to see someone benefit from a skill you have taught them.

Living as an Eagle is much more difficult than earning the rank. 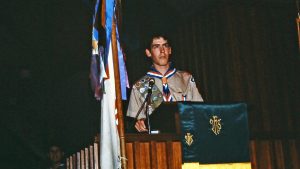 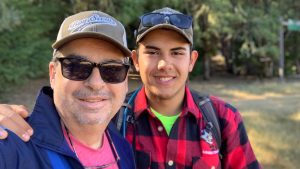